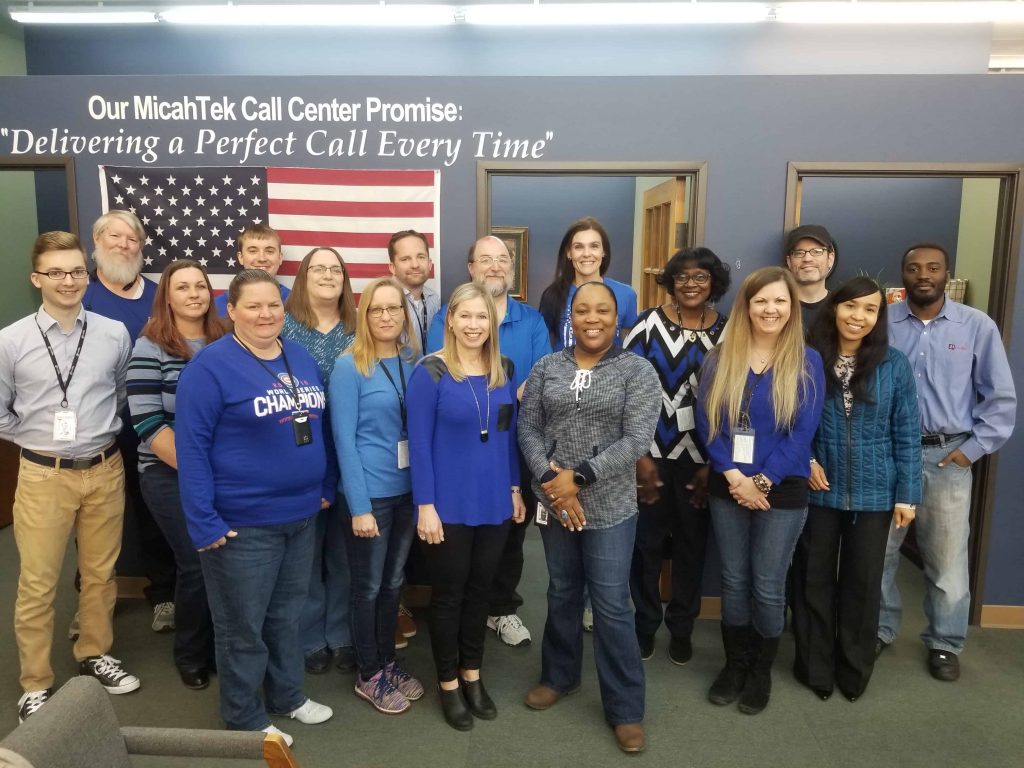 Over the past decade, an increasing amount of individuals have been diagnosed with Autism Spectrum Disorder (ASD). According to the Autism Society, every 1 in 68 births in the United States is an autistic individual. On April 2nd, MicahTek participated in Light it Up Blue, an effort to recognize Autism Awareness. Light it Up Blue is a movement towards the acceptance and appreciation of individuals with Autism Spectrum Disorder. MicahTek committed to wearing blue on National Autism Awareness Day as a sign of support to those with autism. MicahTek believes that each individual is worthy of love and strives to create a company culture of caring kindness towards others.

Nearly a quarter century ago, the Autism Society was the catalyst to a nationwide movement to promote autism awareness and inclusion. The goal of the Autism Society is to provide the highest quality of life to individuals with Autism Spectrum Disorder. Autism Spectrum Disorder is a complex developmental disability, which can affect a person’s ability to communicate. Signs of autism include lack of or delay in speech, repetitive motion, little or no eye contact, and persistent fixation on objects. In a critical and fast paced society, we sometimes forget to love the differences in others. Different does not mean wrong or bad. Light it Up Blue is an effort to bring people of all different backgrounds into agreement about loving the differences in one another. Simply because someone with Autism Spectrum Disorder chooses to communicate differently does not mean that their mode of communication is wrong, it just means we should have a little extra patience. Light it Up Blue is a nationwide effort to recognize the beauty and worth of those diagnosed with autism. Each individual has something to share. Light it Up Blue makes it possible for those with autism to share their uniqueness with the world.

Last year for Light it Up Blue, thousands of supporters lit their businesses blue for the kickoff of Autism Awareness month. Among the blue lit businesses and organizations were the Cleveland Browns Stadium, the New York Red Bulls, the White House, the Rockefeller Center, and even the Ancient City of Petra. The purpose of Light it Up Blue is to embrace the diverse needs of the autism community. Coming together in unity for the sake of acceptance and inclusion is what Light it Up Blue is all about. This year, MicahTek chose to take part in the revolution. Our purpose in participating in Light it Up Blue is not only to show support for those with autism spectrum disorder, but also to resolve to be accepting and inclusive of those around them. Each person has something unique and beautiful to share with the world, including those with Autism Spectrum Disorder. Choose to give voice to those who may not speak as loudly or enunciate as clearly. A revolution begins with one person, choose to be the catalyst for change.

“For we are His workmanship [His own master work, a work of art], created in Christ Jesus [reborn from above—spiritually transformed, renewed, ready to be used] for good works, which God prepared [for us] beforehand [taking paths which He set], so that we would walk in them [living the good life which He prearranged and made ready for us].”